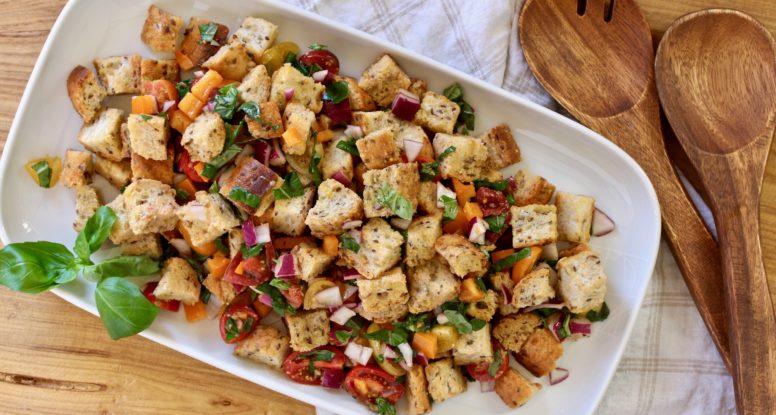 If you’re anything like me, you crave bread. And if you can pair that bread with a really yummy salad, well, that’s pretty darn amazing. Perhaps that’s why I love panzanella so much! Pan-za-WHAT? Oh, you don’t know about it? Well, let me introduce you!

I can’t even remember the first time I encountered panzanella. I really wish I did though. I’m pretty sure I had no idea what it was and I’m pretty sure I had no idea it would be love at first sight. It’s easy to underestimate this delicious Italian dish because panzanella is really just a salad made with bread. Hearing that, you may thing, “eeeewww, gross!” But, this isn’t white bread tossed in a bowl with ranch dressing. No way! It’s a “salad” made with crusty bread cubes that are tossed with a light vinaigrette, tomatoes and at the very least, basil. It’s simple, but delicious and beautiful. So really, panzanella is perfection!

Speaking of white bread, don’t use it. That would be just so gross. That sliced sandwich bread stuff you buy in the bag is NOT gonna work with this recipe. Nope. Spend an extra dollar or two and treat yourself to a yummy baguette or loaf of sourdough. That’s the good stuff you’ll need to make this salad a winner. Trust me.

That’s right, you know I love things that come together quickly and easily and that’s another reason why I love this Italian bread salad. It’s easy and customizable too. That means you can add even MORE veggies to it, if you like. I’m a big fan of cucumber and even olives. And if you want to make this a meal, why not add some rotisserie chicken, roasted salmon or even some beans!? 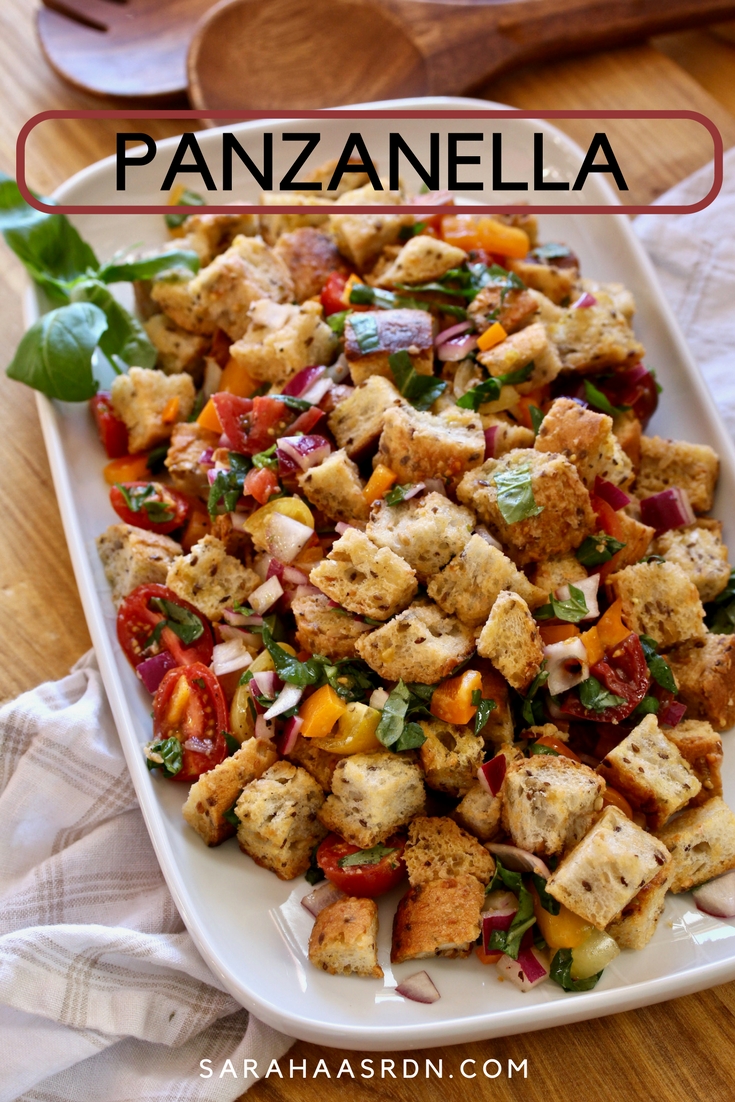 I thought so! Give my panzanella recipe a try and let me know what you think! I hope you love it as much as I do. And if you’re on the hunt for more salad recipes, I’ve got you! Try a few of my other favorite salad recipes below!

A delightful bread salad made with chewy whole grain baguette tossed with fresh tomatoes, basil and a simple vinaigrette.

To get rid of some of the pungency of a fresh onion, chop and then place in a bowl with cold water to cover. Let sit a few minutes, then drain and add to salad.

🚨 Are you hungry? 🚨 Well, THIS bagel-wich

Are you a welcome guest? 🤔 Read my latest for

Raise your hand 🙋‍♀️ if you EAT English m

Tasty recipe alert 🚨!!! These are my Crepes wi

Feels like I’ve been waiting so long for this…