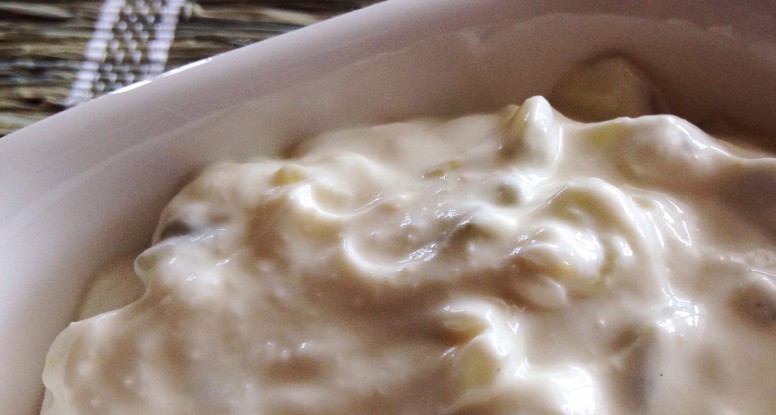 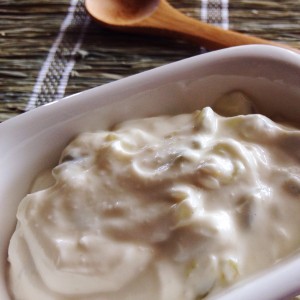 As a kid, I loved the fish sandwich from a certain fast-food chain that shall remain nameless. There was something about it that I just really enjoyed…and I’m quite convinced it was the tartar sauce. For some reason, I always felt that tartar sauce was something special, reserved for fast-food meals or vacation fish joints. We never had it at my house, making it even more alluring.

My fascination with tartar sauce continues. To me, there’s nothing better than a little dab of it on a grilled piece of tilapia or smeared on a hearty bun along with a piece of blackened perch and lots of lettuce. It’s the perfect complement to so many great fish dishes.

That’s why I’ve created my own, simplified, healthier tartar sauce recipe. The ingredients are mostly staples in the pantry, and I’ve used granulated and powdered versions of onion and garlic, respectively, for even quicker and easier preparation. Of course I swapped out most of the mayo for low-fat, plain Greek yogurt, saving calories and adding protein and calcium!

Try it as is, or add a splash of hot sauce or sriracha to spice it up. Experiment with fresh herbs like dill and thyme. It’s the perfect condiment compliment to your favorite fish dish!

The perfect topping for your favorite fish recipes! 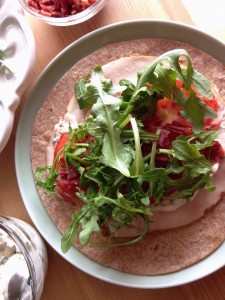 When did a sandwich become a wrap and who had that brilliant idea? More importantly, why didn’t I come up with it? Joking aside, I love the idea of wraps. How many times have you picked up a sandwich only to have all the ingredients fall out of it? Or the mustard or pickle juice ends up all over your hands? With a wrap, you never have to worry about those things.

Want the recipe? Check out my latest blog post on thecuttingboard.org for my Bacon, Lettuce and Turkey Wraps with Chive Aioli Recipe.

A Perfect Pairing: Almonds and Chocolate 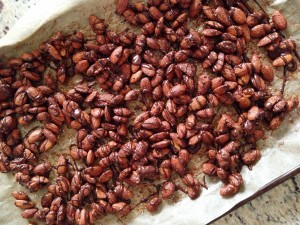 I’m going to let you in on a little secret. Somewhere, hidden deep in the recesses of my pantry is my special stash of chocolate. It’s a secret because, well, I don’t feel like sharing it. No offense to other members of the household, but I just don’t think they would appreciate this little treasure like I do. I hold that stash near and dear to my heart. And thinking about it now, it seems rather ironic that I store it in an old trick-or-treating bucket that looks like a jack-o-lantern…totally classy and mature, I know.

I love chocolate and I have since I was little. Lots of good food memories come to mind when I think of chocolate. Because I love it so much, I suppose that could mean trouble for my waistline. But the good news is, I can control myself because I appreciate chocolate. I see chocolate as a fun indulgence or as a very lovely treat. Because of that, I try to enjoy it and savor it. That means I need less of it!

The ladies over at the Recipe Redux must have channeled my inner choco-holic when they came up with this month’s theme – our favorite pairing for chocolate. My mind of course went crazy with ideas. How about a mole? Or what about a twist on a ‘smore? When it came down to it, I decided upon a recipe that I felt would honor both the dietitian as well as the chocolate-lover in me. Reaching for almonds and my secret stash of chocolate, I bee-lined to the kitchen and got to work. I came up with a recipe that is the perfect snack or treat and one that highlights one of my favorite pairings: nuts and chocolate! Yum! 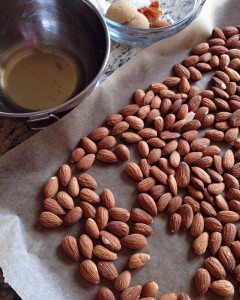 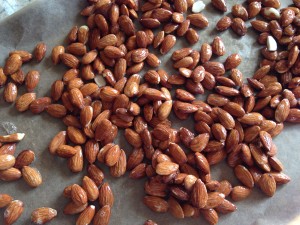 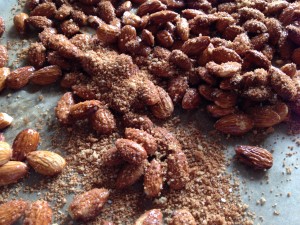 These roasted almonds are a delightful blend of sweet and savory.

It’s Monday!  That means it’s time for a new recipe, one designed to be used for the whole week.  Last week I started the Series off with Roasted Garlic.  I hope that you were able to enjoy those yummy sweet cloves in all of your dishes.

This week I would like to introduce you to balsamic reduction.  You’ve used balsamic vinegar countless times, but did you know that when you cook it down it becomes a rich, thick syrup?  It’s a delicious, low-calorie treat with endless possibilities.  I like to use mine as a dressing for mixed greens or drizzled over a bowl of hearty grains. It’s also fantastic spooned over frozen yogurt or sliced strawberries.

The recipe is simple and you can keep it in the fridge to use all week.  Just be sure to cover with a tight-fitting lid and keep below 40’F.

Use this link to get the recipe.

Grilling isn’t just for hamburgers anymore! Celebrate the summer by preparing your next salad on the grill. It’s easy, flavorful and fun to make.

A grilled salad recipe that easily serves a crowd.

For the grilled vegetables and croutons

Singing the Praises of Sofrito

Cooking is all about building flavor. And when you’re cooking healthfully, putting that into practice is even more important. Because by layering flavor, you can turn a boring dish into an amazing one. One simple way to do that is to start your dish with a blend of herbs, spices and peppers known as a sofrito. Sofritos are commonly used in Latin American cooking, and vary greatly depending on culture. That’s why there are so many unique variations for one seemingly simple recipe. The version I have created here is based loosely on the Puerto Rican interpretation. Puerto Rican sofritos don’t typically call for tomatoes, so you’ll notice there aren’t any in my recipe. I also roasted my vegetables first, which adds a level of sweetness to the sofrito. Cubanelles are one of the main ingredients, but if you can’t find them at your grocery, you can substitute another sweet bell pepper.

What do you do with the sofrito once you make it? There are several fun ways to incorporate sofrito into the dishes you are already making. If rice is on the menu, saute up the sofrito in a little olive oil first, then add the rice and water, cover and cook until done. Or if you are making a soup, sweat some onion, celery and carrot in a pot in a little olive oil, add the sofrito and cook until fragrant, then add your broth and remaining ingredients. What else can you do? Stir sofrito into sauteed vegetable dishes, beans or stews. Or use it as a spread for sandwiches or tortas. The options are truly endless. So enjoy this amazingly healthy recipe to add bold flavors to your next meal.

A simply healthy and delicious recipe that can add flavor to anything from rice dishes to beans.

Top Your Next Salad with This!

If you head down the condiment aisle in the grocery store you’ll notice that the salad dressing industry is booming.  It used to be that there were just a handful of varieties and more often than not, you were reaching for the Ranch or Italian version from the brand of your choice.  Now it can take 5 minutes to just narrow down the choices.  While I appreciate the convenience of pre-made salad dressing, I still choose to make my own.  Why?  Well, because like most of the other food I make, I know what’s going in it.  It’s also almost always cheaper and it doesn’t even take that long to make.  One of my favorites it’s a creamy, spicy chipotle dressing.  Not only is it great on salad, but it’s also delicious tossed with cold pasta and veggies for a Southwest pasta salad.  You can also use it as a spread for sandwiches or wraps.  It can be a fun swap for sour cream in tacos or other Mexican dishes.  It’s worth a shot and who knows, maybe you’ll find yourself skipping that condiment aisle at your next trip to the grocery!

A zesty dressing that can be used for more than just salad!